Book Launch: In Those Days, Collected Writings on Arctic History 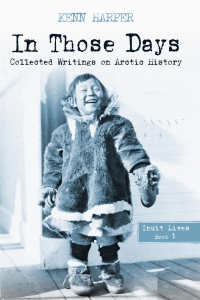 Arctic historian Kenn Harper gathers the best of his columns about Inuit history, which appear weekly in Nunatsiaq News, in this exciting new series of books.

Each installment of In Those Days: Collected Writings on Arctic History will cover a particularly fascinating aspect of traditional Inuit life. In volume one, “Inuit Biographies,” Harper shares the unique challenges and life histories of several Inuit living in pre-contact times.

The result of extensive interviews, research, and travel across the Arctic, these amazing short life histories provide readers with a detailed understanding of their specific time and place.

Author Kenn Harper will be joined by Leena Evic who is a traditional Inuk singer, as well as the founder, vision keeper and Executive Director for Pirurvik at this launch. He will also be joined by students from the Nunavut Sivuniksavut college program in Ottawa for a short performance of Inuit songs and drumming.

About the Author & GUEST

KENN HARPER is a Canadian historian, teacher, development officer, linguist, and businessman. He is an author of books on life in the high Arctic and a Fellow of the Royal Geographical Society. His book, Give Me My Father's Body, tells the tragic yet compelling story of Minik Wallace, a member of the Inughuit tribe who was taken by Robert Peary from his home in northwest Greenland to New York. In 2005, Harper was appointed Danish Honorary Consul, a posting located in Iqaluit, Nunavut.

LEENA EVIC is the founder, vision keeper and Executive Director for Pirurvik. She works in all areas of Pirurvik’s operations; however, she is most actively involved in shaping and developing Pirurvik’s programs and productions. Born and raised on the land, Leena has pursued life interests emphasizing education, culture, language and healing.  Leena has worked as a teacher, principal and curriculum developer and has extensive management experience in government and Inuit organizations. Leena has a Bachelors of Education from McGill University where she was also a Master’s candidate emphasizing research in educational leadership and culture-based education.