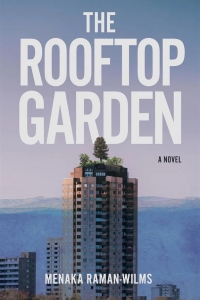 Join Octopus Books for the launch of The Rooftop Garden, the debut novel by Menaka Raman-Wilms. Featuring the author in conversation with Sarah Everts, journalism professor at Carleton University.

The Rooftop Garden is a novel about Nabila, a researcher who studies seaweed in warming oceans, and her childhood friend Matthew. Now both in their twenties, Matthew has disappeared from his Toronto home, and Nabila travels to Berlin to find him and try to bring him back.

The story is interspersed with scenes from their childhood, when Nabila, obsessed with how the climate crisis will cause oceans to rise, created an elaborate imaginary world where much of the land has flooded. She and Matthew would play their game on her rooftop garden, the only oasis in an abandoned city being claimed by water.

Their childhood experiences reveal how their lives are on different trajectories, even at an early stage: Nabila comes from an educated, middle-class family, while Matthew had been abandoned by his father and was often left to deal with things on his own.

As an adult, Matthew’s dissatisfaction with life leads him to join a group of young men who are angry at society. He eventually finds himself on a violent suicide mission, but Nabila isn’t aware of the extent of his radicalization until they finally meet on a street in Berlin.

“I was struck immediately by Menaka Raman-Wilms’s gorgeous, sensory imagery, her pacing, and her soaring and unique voice. I read The Rooftop Garden in a single sitting, instantly invested in the artful, discerning biologist Nabila and her childhood friend Matthew. From her evocative settings, to her carefully drawn tensions, to her astute political observations, Menaka Raman-Wilms is a major talent.” – Danila Botha, author of For All the Men (and Some of the Women) I've Known

“The Rooftop Garden is a novel elevated in its exposition of the radicalization of young men, and endearing in its portrayal of childhood friendships. A brilliant novel.” – Ian Thomas Shaw, author of Quill of the Dove

Menaka Raman-Wilms is a writer and journalist based in Toronto. She’s the host of The Decibel, the daily news podcast from The Globe and Mail. Previously, she was a parliamentary reporter for The Globe and Mail and an associate producer at CBC Radio One. For several years, Menaka reviewed books for the Ottawa Review of Books, and has moderated panel discussions at Ottawa’s Prose in the Park literary festival. In 2019, Menaka’s story “Black Coffee” was shortlisted for the CBC Short Story Prize. She received the youth award at the Alice Munro Festival of the Short Story in 2016, and won Room Magazine’s 2012 fiction contest.