Book Launch: The Politics of Painting: Fascism and Japanese Art during the Second World War by Asato Ikeda 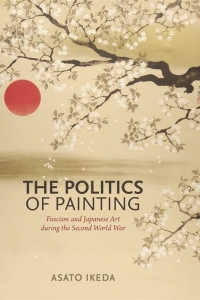 Please join us Thursday, July 19th from 4:00-6:00pm in 201D St. Patrick’s, Carleton University for the Ottawa launch of The Politics of Painting: Fascism and Japanese Art during the Second World War, written by Dr. Asato Ikeda, Assistant Professor of Art History at Fordham University.

The Politics of Painting examines a set of paintings produced in Japan during the 1930s and early 1940s that have received little scholarly attention. Dr. Ikeda views the work of four prominent artists of the time —Yokoyama Taikan, Yasuda Yukihiko, Uemura Shōen, and Fujita Tsuguharu— through the lens of fascism, showing how their seemingly straightforward paintings of Mount Fuji, samurai, beautiful women, and the countryside supported the war by reinforcing a state ideology that justified violence in the name of the country’s cultural authenticity. She highlights the politics of “apolitical” art and challenges the postwar labelling of battle paintings —those depicting scenes of war and combat— as uniquely problematic.

Focusing on Japanese fascism and the Second World War, the book makes major contributions to the study of Japanese art and modernity. It reveals the global dimensions of wartime nationalist art, opening up the possibility of dialogue with scholarship on art exhibited and produced in other nations around the same time, particularly in Nazi Germany and Fascist Italy.

Dr. Ikeda will give a presentation about the book, followed by a discussion and Q&A period moderated by Cultural Mediations PhD students Victoria Nolte and Emily Putnam. Refreshments will be served.

The Politics of Painting: Fascism and Japanese Art during the Second World War is published by the University of Hawaii Press.