Book Launch: It Should Be Easy to Fix by Bonnie Robichaud 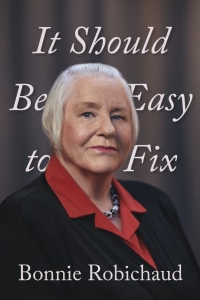 Join us for the online launch of It Should Be Easy to Fix, a new memoir by Bonnie Robichaud. Presented by Between the Lines, the Workers' History Museum, GAIHST, and Octopus Books.

Bonnie will be joined by two feminist advocates:

- Julie Macarlane, author of Going Public: A Survivor's Journey from Grief to Action and co-founder of the Can't Buy My Silence campaign to ban non-disclosure agreements.

In 1977, Bonnie Robichaud accepted a job at the Department of Defence military base in North Bay, Ontario. After a string of dead-end jobs, with five young children at home, Robichaud was ecstatic to have found a unionized job with steady pay, benefits, and vacation time.

After her supervisor began to sexually harass and intimidate her, her story could have followed the same course as countless women before her: endure, stay silent, and eventually quit. Instead, Robichaud filed a complaint after her probation period was up. When a high-ranking officer said she was the only one who had ever complained, Robichaud said, “Good. Then it should be easy to fix.”

This timely and revelatory memoir follows her gruelling eleven-year fight for justice, which was won in the Supreme Court of Canada. The unanimous decision set a historic legal precedent that employers are responsible for maintaining a respectful and harassment-free workplace. Robichaud’s story is a landmark piece of Canadian labour history—one that is more relevant today than ever.

“It Should Be Easy to Fix is an important look beyond the headlines of Bonnie Robichaud’s groundbreaking court victory. A working-class mother from Northern Ontario, she is the unlikely hero of this story. Yet in these pages, she powerfully details how she remained steadfast in her belief that a safe workplace was her right. Canadian women are safer as a result of her sacrifice.” – Julie S. Lalonde, author of Resilience Is Futile: The Life and Death and Life of Julie S. Lalonde

“The straight-goods inside story about what sexual harassment really feels like. An eleven-year struggle toward an unprecedented legal victory in the Supreme Court. Bonnie Robichaud survived to tell the tale, as the living embodiment of the solution, not the problem. To echo Justice L’Heureux-Dubé, she is my hero.” – Constance Backhouse, co-author of The Secret Oppression: Sexual Harassment of Working Women

“This is a story every student and worker should read. Although the events Robichaud recounts happened long ago, women and other feminized people encounter similarly dismissive attitudes and ongoing intransigence about workplace sexual harassment today. This riveting account gives us hope and ammunition to not just protect the gains of the past, but to also expand the fight for justice in the present.” – Susan Ferguson, author of Women and Work: Feminism, Labour, and Social Reproduction