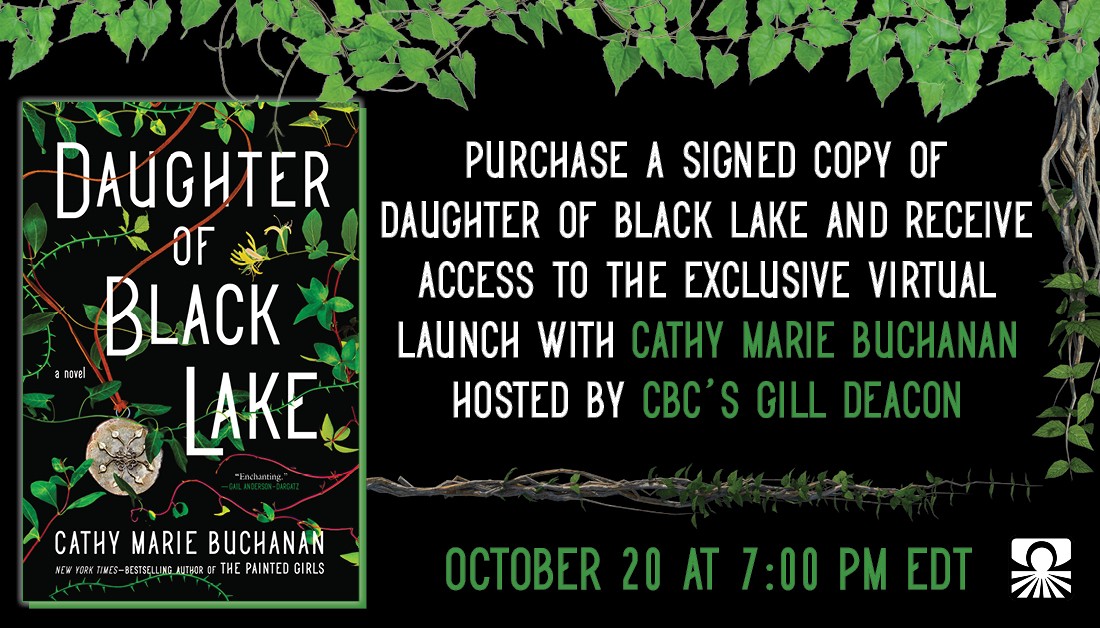 Join Cathy Marie Buchanan, bestselling author of The Painted Girls, for an exclusive virtual launch of her new novel, Daughter of Black Lake.

Buy a signed copy of Daughter of Black Lake from a participating independent retailer (that's us!) to get access to this exclusive virtual event on October 20th. After attending this event you’ll get access to an exclusive video yoga class, hosted by Cathy Marie Buchanan with additional insight into her writing process.

When a remote, ancient settlement is threatened, it is up to one girl to save her family and her community.

It’s the season of Fallow, the first century AD. In a misty northern bog surrounded by woodlands and wheat fields, lies a settlement far beyond the reach of the Roman invaders, who are still hundreds of miles to the southeast. Here, life is simple, or so it seems to the tightly knit community. Sow. Reap. Honour Mother Earth, who will provide at harvest time.

A girl named Devout comes of age. She flirts sweetly with the young man who has tilled the earth alongside her all her life, envisioning a future of love and abundance. Seventeen years later, however, the settlement is a changed place. Famine has brought struggle, and outsiders, with their military might and foreign ways, have arrived at the doorstep. For Devout’s young daughter, life is more troubled than her mother ever anticipated. But this girl has an extraordinary gift. As worlds collide and peril threatens, it will be up to her to save her family and her community. Immersing readers in a lost world of pagan traditions, Daughter of Black Lake is a transporting story of love, family, survival and the sublime power of the natural world.

“Buchanan has crafted an engrossing novel awash in historical atmosphere. From religious beliefs to culture clashes to social stratification and the activities of daily life, Buchanan immerses readers in Roman Britain in this beautifully emotive tale of family, community, and love." - Booklist