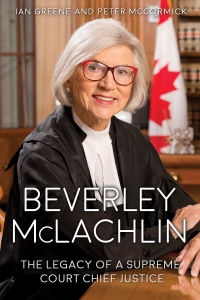 Join us for the Ottawa launch of a new biography brimming with insight into Beverley McLachlin's unparalleled career as a jurist and leader of the Supreme Court of Canada. Authors Ian Greene and Peter McCormick will discuss the life, career and legacy of this remarkable woman.

As a judge, Beverley McLachlin is known for her unique ability to stand up for the values and beliefs that reflect the best of Canada and Canadians. As chief justice, she led the way to assisted suicide legislation, greater recognition of aboriginal rights and title, safe injection sites for drug users and many other changes that have had a dramatic impact on Canadian life. Less well known is how she encouraged collegiality within the Supreme Court and led Canadian judges to pay closer attention to real-world information about the issues they are considering.

Her defence of the independence of the court and her own personal integrity when she was attacked by Stephen Harper — an incident discussed and documented in this book — underline her strength of character and integrity.

This book sketches Beverley McLachlin's experiences growing up in rural Alberta, attending university, becoming a lawyer and then a judge. At a time when governments were seeking qualified women for senior positions in Canada's courts, she was selected by politicians, both Liberal and Conservative, to fill progressively higher positions. As leading Canadian writers on the role of the judiciary in Canada, Ian Greene and Peter McCormick offer readers a balanced, informed perspective on her time on the Supreme Court — a role that was remarkable for her prodigious work and the clarity of her decisions.

IAN GREENE is a University Professor Emeritus at York University, where he has taught public policy and administration since 1985. He was the founding director of York's Masters program in Public Policy, Administration and Law. Greene's most recent book is Honest Politics Now (with David P. Shugarman). He is also the author of The Charter of Rights and Freedoms. He lives in Toronto, Ontario.

"Ian Green and Peter McCormick have given us a first in writing about the Supreme Court of Canada: an inquiry into the difference a chief justice can make in the way the court functions and serves the country." - Peter H. Russell, Professor Emeritus of Political Science at the University of Toronto