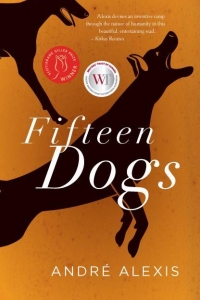 Our book club will be discussing Fifteen Dogs by Andre Alexis on Tuesday, March 7th. If you are interested in joining us please RSVP at events@octopusbooks.ca.

An utterly convincing and moving look at the beauty and perils of consciousness.

WINNER OF THE 2015 GILLER PRIZE

FINALIST FOR THE 2015 TORONTO BOOK AWARDS

— I wonder, said Hermes, what it would be like if animals had human intelligence.

— I'll wager a year's servitude, answered Apollo, that animals – any animal you like – would be even more unhappy than humans are, if they were given human intelligence.

And so it begins: a bet between the gods Hermes and Apollo leads them to grant human consciousness and language to a group of dogs overnighting at a Toronto veterinary clinic. Suddenly capable of more complex thought, the pack is torn between those who resist the new ways of thinking, preferring the old 'dog' ways, and those who embrace the change. The gods watch from above as the dogs venture into their newly unfamiliar world, as they become divided among themselves, as each struggles with new thoughts and feelings. Wily Benjy moves from home to home, Prince becomes a poet, and Majnoun forges a relationship with a kind couple that stops even the Fates in their tracks.

André Alexis's contemporary take on the apologue offers an utterly compelling and affecting look at the beauty and perils of human consciousness. By turns meditative and devastating, charming and strange, Fifteen Dogs shows you can teach an old genre new tricks.

'What does it mean to be alive? To think, to feel, to love and to envy? André Alexis explores all of this and more in the extraordinary Fifteen Dogs, an insightful and philosophical meditation on the nature of consciousness. It’s a novel filled with balancing acts: humour juxtaposed with savagery, solitude with the desperate need to be part of a pack, perceptive prose interspersed with playful poetry. A wonderful and original piece of writing that challenges the reader to examine their own existence and recall the age old question, what’s the meaning of life?' - The 2015 Giller jury citation

'In Fifteen Dogs – André Alexis’ powerful apologue – questions of knowledge and happiness, fidelity and fate are grounded in the real-world adventures of a group of dogs. Here is a beautifully written allegory for our times: one in which man’s best friend shows us the benefits of higher consciousness – the favoured bone of fact buried where we might all find it. Fifteen Dogs is an original and vital work written by a master craftsman: philosophy given a perfect form.' - The 2015 Rogers Writers' Trust Fiction Prize jury citation