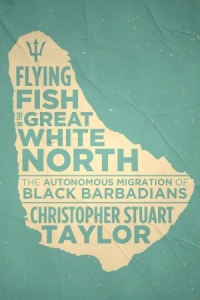 Please join us celebrating Black History Month with author Christopher Stuart Taylor in a discussion of his new book Flying Fish in the Great White North: The Autonomous Migration of Black Barbadians. Dr. Christopher Stuart Taylor based in Toronto is an Assistant Professor at Western University. He focuses on issues in diversity and inclusion, Barbadian history, Black Canadian history, race, Black identity and immigration.

Canadians are proud of their multicultural image both at home and abroad. But that image isn’t grounded in historical facts. As recently as the 1960s, the Canadian government enforced discriminatory, anti-Black immigration policies, designed to restrict and prohibit the entry of Black Barbadians and Black West Indians. The Canadian state capitalized on the public’s fear of the “Black unknown” and racist stereotypes to justify their exclusion.

In Flying Fish in the Great White North, Christopher Stuart Taylor utilizes the intersectionality of race, gender and class to challenge the perception that Blacks were simply victims of racist and discriminatory Canadian and international immigration policies by emphasizing the agency and educational capital of Black Barbadian emigrants during this period. In fact, many Barbadians were middle to upper class and were well educated, and many, particularly women, found autonomous agency and challenged the very Canadian immigration policies designed to exclude them.