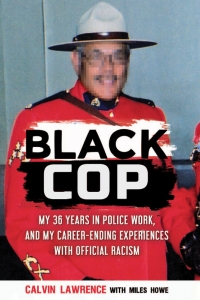 Join us for the launch of Black Cop: My 36 years in police work, and my career ending experiences with official racism by Calvin Lawrence, with Miles Howe.

When Calvin Lawrence joined the Halifax City Police in 1969, he thought he knew what to expect. There was growing tension in the city between the black community and the police, and Calvin believed that as a black police officer he would be able to make a difference.

But what he didn't know was that he was embarking on a life-long career in which he would consistently be the target of racist behaviour — from his co-workers and his superiors, and from police organizations as a whole. Calvin describes how he was the target of racial slurs, mocked for being black, pigeonholed into roles, and denied advancement because he was not white. After 36 years in law enforcement, Calvin retired early from the police, suffering from clinical depression and with a settlement from the RCMP after winning a Human Rights complaint.

Calvin holds nothing back as he reflects on a career that took him across the country — he shares his experiences as Newfoundland's only black police officer, his undercover stints in Edmonton and Toronto, and his time in Ottawa protecting major world leaders like Jimmy Carter and Brian Mulroney.

Calvin Lawrence's story lays bare the key failures of Canadian police organizations that operate on the basis that only white Canadians are entitled to the rights promised to all by the rule of law and the Canadian Charter of Rights.

Miles Howe is a PhD candidate and an instructor at Queen's University at Kingston, Ontario. A former freelance journalist based in Halifax, he is also the author of Debriefing Elsipogtog: The Anatomy of a Struggle. Miles lives in Kingston.