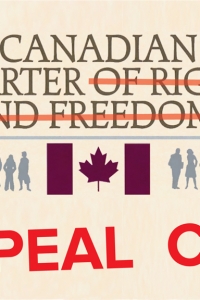 Bill C-51 also known as Anti-terrorism Act was introduced by the previous Conservative government in early 2015. Masked as a Bill to increase the safety and security of all Canadians, Bill C-51 is in fact a mechanism to create a “secret police force” in Canada and cultivate fear among us in our society.

According to this report on CBC News: This anti-terror legislation contains “a sweeping range of measures that would allow suspects to be detained based on less evidence and let CSIS [the Canadian Security Intelligence Service] actively interfere with suspects' travel plans and finances.”. It gives CSIS (and RCMP) more power with minimal oversight or democratic accountability.

Before the Bill was passed by the House of Commons, received royal assent and became law in June 2015, numerous protests across Canada and online petitions led by civil societies were held to ask MPs to “Reject Fear” and stop the bill. Experts, including more than 100 academics, made up mainly of law professors from across Canada, also argued that the anti-terrorism legislation is far too broad and doesn't come with safeguards to protect Canadians' privacy rights and freedom of speech.

With the Liberal Party in power since Fall in 2015, Prime Minister Justin Trudeau has instructed his ministers of Justice and Public Safety to “repeal the problematic elements of the Bill and introduce new legislation that better balances our collective security with our rights and freedoms”.

Andrew Mitrovica, an investigative Journalist, has written and spoken extensively on the issue of Bill C-51. He argued that the BILL STILL NEEDS TO BE ERASED. On Saturday, May 7 at 1:30 PM, we will have Andrew Mitrovica with us to talk about this dangerous Bill that affects us all, especially the most marginalized. Lets come together, discuss this important issue and strategize ways to safeguard our privacy rights and freedom of speech.

There will be ample time for Q&A.

Andrew Mitrovica is a writer and journalism instructor. For much of his career, Andrew was an investigative reporter for a variety of news organizations and publications including the CBC’s fifth estate, CTV’s W5, CTV National News — where he was the network’s chief investigative producer — the Walrus magazine and the Globe and Mail, where he was a member of the newspaper’s investigative unit. During the course of his 30-year career, Andrew has won numerous national and international awards for his investigative work. But everyone in journalism wins awards, so it's really not that impressive. Today, his column appears in the National Observer.