Beyond the Altar Book Launch with Christine L.M. Gervais 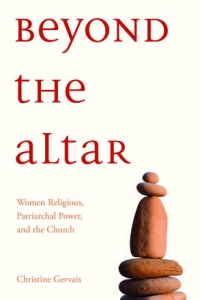 Beyond the Altar illustrates how women religious overcome sexist subjugation by side-stepping the patriarchal power of the Roman Catholic Church. This book counters the stereotypical image of Catholic nuns as being loyally compliant with their church by showing how a number of current and former women religious in Canada challenge their institutional religion’s precepts and engage in transformative strategies to effect change both within and outside the Roman Catholic Church.

The sisters’ testimonials reveal never-before-shared details about their painful experiences of male domination, their courageous efforts to move beyond such sexist stifling, and the women-led and women-centered spiritual, governance, and activist practices they have engendered in the late twentieth and early twenty-first centuries.

Featuring many examples of the sisters’ resourcefulness, resilience, and resistance, this book fills a void in international scholarship on what Canadian Catholic women religious have endured and accomplished. Through interviews and in-depth accounts of the complexities and nuances present in the current and former sisters’ lives, readers will discover their steadfast indomitability as they strategically, and sometimes subversively, innovate their spiritual spaces.

Christine L.M. Gervais is an associate professor in the Faculty of Social Sciences (Criminology) at the University of Ottawa. Her teaching and research areas include children’s and women’s rights in Latin America, social justice, and gender discrimination in religious institutions. She has published in Signs, Canadian Woman Studies, Journal of International Women’s Studies, Sociology of Religion, Religions, and Review of Religious Research.