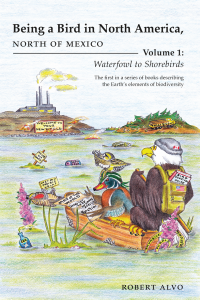 Being a Bird in North America (BABINA) brings birds to life on the page with a blend of humor and science that showcases the most interesting aspects of each species. With over 200 original cartoons, this book makes every species memorable, and sets itself apart from field guides. Whether the reader is new to the world of birds or a veteran birder, BABINA offers new insight into the lives of birds. It reveals the tricks used by birds to survive, the real problems they face, and addresses their conservation issues.

Author of this fantastic book, Robert Alvo , will be at our Glebe location on April 9 from 2 PM to 4 PM for a reading and signing of his new book: Being a Bird in North America.

Please join us. All are welcome!

"A Terrific And Entertaining Read!"

Robert Alvo is a conservation biologist, bird expert, and author of Being a Bird in North America (BABINA).

Robert first discovered his passion for the natural world at age ten. His family had just moved from Montreal to Greece, and his walk to school took him through the hills of Thessaloniki. His fascination with the birds and other wildlife in the countryside ignited his lifelong study of the natural world.

After high school, Robert returned to Canada to study biology at Queen’s University in Kingston. While working on his Master’s degree at Trent University, Robert examined the effects of acid rain on the Common Loon, and has continued that research for over thirty years. The latest results from this project were published in 2009, reporting on 25 years of research.

Robert Alvo currently resides in Ottawa, Ontario, and is spending the year touring and giving talks on Being a Bird in North America.