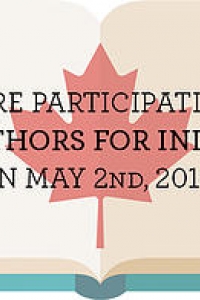 Come hang out with your local authors at our Glebe store on Saturday, May 2nd! 3 local authors, Waubgeshig Rice, Monia Mazigh and Peggy Blair,  will be visiting us in the Glebe for Authors for Indies Day on May 2nd in a celebration of reading, writing, and independent bookstores!

Inspired by the hugely successful Indies First campaign in the United States, Authors for Indies started out as a BC-based initiative. With help from publishers, the B.C. Booksellers Association, the Vancouver Writers’ Festival, and the Retail Council of Canada, the movement has spread across the country, with almost 400 authors and more than 100 bookstores already signed up.

Stop by for some treats, meet your local authors, hear their recommendations for a book to read, and help us celebrate the spirit of independent bookstores!

We will have several draws throughout the day!

For more info about Authors for Indies Day: http://www.authorsforindies.com/.

“If stories are the pillars of our cultures, then independent bookstores are the foundations of our communities. Their presence in our towns and cities makes us all stronger.” - Waubgeshig Rice

"Eat local and buy your books local. It supports your local economy and it will support your local independant bookstore" - Monia Mazigh

"Independent bookstores are run by people who are as passionate about readers as they are about books. They can help you make remarkable connections with authors and explore deeply imagined worlds. Every time you pick up a book, you get to travel somewhere new. What could be more wonderful?" - Peggy Blair

Waubgeshig Rice is a broadcast journalist and writer who lives in Ottawa. He grew up in Wasauksing, an Anishinaabe community on the shores of Georgian Bay. His articles, essays and columns have been published in national newspapers and magazines, and as a television journalist he has filed reports from across Canada. Waubgeshig Rice is the author of 2 books: Midnight Sweatlodge (a collection of short stories) and Legacy (novel) released in 2014.

Monia Mazigh holds a Ph.D. in finance from McGill University. In 2009, she published her memoir, Hope and Despair, about her fight to free her husband, Maher Arar, from a Syrian jail. Her debut novel, Miroirs et mirages, published originally in French, was a finalist for the Trillium Book Award. Mirrors and Mirages has been translated into English and was published last year (2014) by House of Anansi.

Peggy Blair was a lawyer for more than thirty years. A recognized expert in Aboriginal law, she worked as both a criminal defence lawyer and Crown prosecutor. A former member of the Canadian Human Rights Tribunal, Blair is named in the Canadian Who's Who. Her critically acclaimed mystery The Beggar’s Opera won the 2012 Scotiabank Giller Prize Readers’ Choice contest and was shortlisted for the Crime Writers Association Debut Dagger Award. The Poisoned Pawn is the second in the Inspector Ramirez series. Her third novel in the same series Hungry Ghost will be released in June this year.