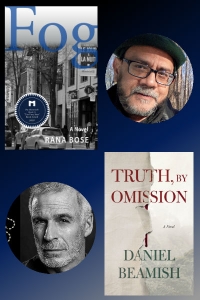 Join us in our store for readings from two new thrilling books by Montreal's Rana Bose and Ottawa's Daniel Beamish.

A small plane was blown up in an act of sabotage several years ago over Eastern Quebec, Canada. All the passengers and crew were killed. The incident was quickly analyzed and termed a mechanical failure. The case was declared cold, in a rush. What intrigue and what unseen, powerful forces could hush up such a catastrophic incident? A young actor from Montreal dies in Afghanistan. Killed by a missile from a drone. His death opens up wounds and discussions that are not in the public domain. These two seemingly disparate events form the backbone of a compelling contemporary thriller, set in the Main district of Montreal and in the blue-green mountains of Kandahar.

"A literate mystery/thriller set in Montreal (on “the Main”) with side trips to Calcutta and Kandahar, this is a superbly written book about a neighbourhood, friendships, justice and belonging.” — James Fisher, The Miramichi Reader

Daniel Beamish's debut novel, Truth, by Omission, is a poignant saga spanning decades and continents. After surviving a desperate childhood of lawlessness and violence, Alfred Olyontombo makes his way to a refugee camp while Rwanda’s genocide rages behind him. His knowledge of local languages catches the attention of an idealistic young doctor who opens the door to a whole new life for Alfred. Seizing the chance, he moves forward, embracing the American dream and becoming a respected physician married to a successful lawyer in Colorado. However, his new life comes to a screeching halt when the transgressions of his youth come back to haunt him. With his future hanging in the balance, Alfred is forced to face the misdeeds—and the nemesis—he’d hoped time had buried forever. But is it too late for the truth to matter? And which version of the truth can save him?

''A riveting saga spanning continents with an important message for our troubled times.'' — Vikas Swarup, bestselling author of Slumdog Millionaire