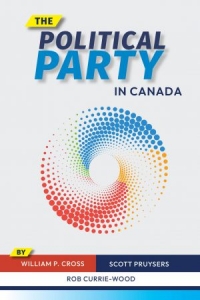 Author Meets Readers invites Carleton students and the community to join an informal discussion on new books published by members of the Carleton University Faculty of Public Affairs.

About The Political Party in Canada

A comprehensive exploration of Canadian political party composition and organization. Political parties exist at the center of democratic politics, but where does power lie within them, and how is it exercised? The Political Party in Canada explores the inner workings of these complex organizations, disaggregating the composition and roles of party members and activists, candidates, local associations, donors, and central officials. Drawing on a rich trove of data from the 2015 and 2019 federal elections, this book offers a comprehensive examination of the composition, functions, activities, and power-sharing relationships that characterize Canadian parties. Basing its astute investigation on the themes of complexity, representation, and personalization, The Political Party in Canada opens a window on a fundamental institution that makes modern democracy possible.

Dr. Bill Cross is a student of Canadian and comparative political institutions and his work emphasizes the connections between civil society and political parties and legislatures. His recent work focusses on questions relating to intra-party democracy and organization. This includes studies of party leadership selection, candidate recruitment and selection, party membership, election campaigning and power relations between local and national party organizations across the Anglo parliamentary democracies. In recent work, Dr. Cross has explored the relationship between party organization and gender. Among his many publications are Regional Battles, National Prize? Elections in a Federal State and Politics at the Centre: The Selection and Removal of Party Leaders in the Anglo Parliamentary Democracies, which received the 2013 Donald Smiley Prize.

Scott Pruysers is an Assistant Professor in the Department of Political Science at Dalhousie University. He received his PhD from Carleton in 2015. His research focusses on Canadian politics generally, and intra-party democracy, party organization, and political psychology specifically. His co-authored and co-edited books include The Personalization of Democratic Politics and the Challenge for Political Parties (Rowman and Littlefield/ECPR Press, 2018).

Rob Currie-Wood is an Assistant Professor at St. Francis Xavier University. He received his Ph.D. from Carleton in 2022. His research focusses on Canadian politics, intra-party democracy, party reform, election campaigning, and election finance law. His work on these topics has been published in the Canadian Journal of Political Science and Political Geography.

David Coletto manages the day to day operations and leads Abacus Data’s team of research consultants and strategists, delivering strategic advice and research design expertise to some of Canada’s leading corporations, advocacy groups, and political leaders. Coletto has more than a decade of experience working in the marketing research industry and is an industry leader in online research methodologies, public affairs research, corporate and organizational reputation studies, and youth research.

Dr. Paul Thomas is the Director of the Parliamentary Internship Programme (PIP), an educational initiative of the Canadian Political Science Association that each year gives 10 recent university graduates the opportunity to work for both government and opposition MPs. He is also an Adjunct Research Professor with Department of Political Science and the Clayton H. Riddell Graduate Programme in Political Management at Carleton University. Paul has spent more than a decade working in and researching British and Canadian politics.

This event is part of the Ottawa International Writer’s Festival.