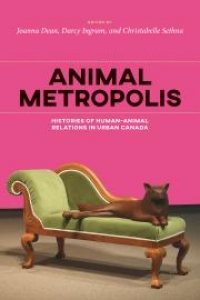 Animal Metropolis brings a Canadian perspective to the growing field of animal history, ranging across species and cities, from the beavers who engineered Stanley Park to the carthorses who shaped the city of Montreal. Some essays consider animals as spectacle: orca captivity in Vancouver, polar bear tourism in Churchill, Manitoba, fish on display in the Dominion Fisheries Museum, and the racialized memory of Jumbo the elephant in St. Thomas, Ontario. Others examine the bodily intimacies of shared urban spaces:  the regulation of rabid dogs in Banff, the maternal politics of pure milk in Hamilton and the circulation of tetanus bacilli from horse to human in Toronto. Another considers the marginalization of women in Canada’s animal welfare movement. The authors collectively push forward from a historiography that features nonhuman animals as objects within human-centered inquiries to a historiography that considers the eclectic contacts, exchanges, and cohabitation of human and nonhuman animals.

Joanna Dean teaches the history of animal-human relations as an associate professor in the Department of History at Carleton University. She researches and writes about urban plants and animals, mainly street trees and city horses.  She shares a farm in Quebec with otters, horses, porcupines, geese, and many other creatures.

William Knight is a curator of agriculture and fisheries at the Canada Science and Technology Museums Corp.  He graduated in 2014 from Carleton University with a PhD in Canadian history. He was born and raised in Ottawa.

Christabelle Sethna holds a PhD. in the History of Education. She is an Associate Professor in the Institute of Feminist and Gender Studies, University of Ottawa. Her topics of study are the history of sex education, contraception and abortion in Canada. She uses a feminist, translational, and postcolonial approach that connects the local to the global. Professor Sethna has worked on the history of the birth control pill in Canada between 1960-1980 and its impact on young, single, university women. She is now researching the travel women undertake to access abortion services both domestically and internationally. She is extending the work she has done previously to the representation of animals.