An Evening with the Filmmaker and Poet Shane Book 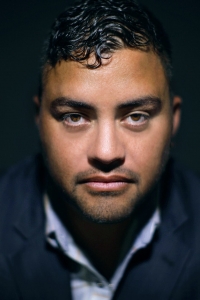 On Sunday April 19th at 7pm the Independent Film Cooperative of Ottawa (IFCO) presents "An Evening with the Filmmaker and Poet Shane Book" at the Mercury Lounge (56 Byward Market Square).

The event will feature two of Book's most recent films, a few of his poems and a conversation facilitated by Adrian Harewood (CBC Ottawa). There will also be performances by the dynamic teenage bass player and vocalist Angelique Francis and by DJ Trevor Walker.

The two films being screened are Shane Book's 2013 award-winning short film Dust, and the world premiere of his much-anticipated short film Praise and Blame.

In Dust, a young poet's final evening with his girlfriend sparks memories of an afternoon spent with his ailing grandfather. The film, adapted from Book's National Magazine Award-winning poem, is an exploration of the nature of grief and a poetic meditation of water, skin and dust. Dust was an official selection at numerous film festivals around the world including the Trinidad and Tobago Film Festival, the Hollywood Black Film Festival and the Santa Cruz Film Festival.

Praise and Blame is a dark comedy about poets, exiles, burglars, secrets and the intellectual elite, and stars Costas Mandylor (Sex and the City, The SAW Movies, Picket Fences,The Doors).

Shane Book was born in Lima, Peru and raised in Ghana and Ottawa and - where he attended Merivale High School. He holds an MFA in Creative Writing from the University of Iowa Writers' Workshop. In 2013 he received an MFA in Film and Media Arts from Temple University.

Book has also received widespread acclaim as a poet. His first collection of poetry Ceiling of Sticks (University of Nebraska Press, 2010) won the Prairie Schooner Book Prize and the Great Lakes Colleges Association New Writers Award and was a Poetry Society of America "New Poet" Selection. Selections from Ceiling of Sticks won the National Magazine Award. His most recent collection, Congotronic, was a Kuhl House Poets Series Selection, chosen for inclusion in The Best American Experimental Writing 2015, and named a "New and Notable Book" by Poets and Writers Magazine.  Congotronic was published in 2014 in the U.S. by the University of Iowa Press and in Canada by House of Anansi Press. In April 2015, Congotronic was named to the shortlist for the Griffin Poetry Prize, the most lucrative and prestigious poetry award in the world.

His writing has appeared in more than twenty anthologies and over seventy magazines in the U.S., U.K., and Canada. His other honors include a New York Times Fellowship in Poetry, an Academy of American Poets Prize, fellowships from the Telluride Film Festival and the Flaherty Film Seminar and a National Magazine Award.  His award-winning films have been screened at festivals and on television around the world.

Shane has just been appointed Professor of English at Western Kentucky University in Bowling Green, Kentucky where he will help launch the university's new MFA program.