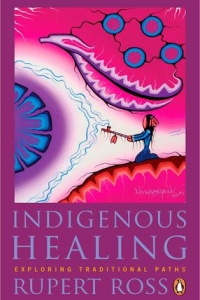 Ross’s first book, Dancing with a Ghost, began his exploration of aboriginal approaches to justice and the visions of life that shape them. In his second book, Returning to the Teachings, Ross went on to examine the aboriginal preference for “peacemaker justice.”

In Indigenous Healing, the former crown prosecutor Rupert Ross shares the lessons and insight acquired from years of working with, and learning from, aboriginal communities across Canada. He shares a vision of justice and healing—a way of seeing that existed long before Europeans came to this continent—that persists today, albeit often in conflict with western culture. He examines the effects of colonization and assimilation and how social trauma is in fact magnified over the years, passed down to new generations.

Perhaps most difficult for Ross was accepting the aboriginal view that justice is about healing, not punishment. With the lessons here, Ross looks to the future to how health and happiness can be created.

Rupert Ross is a retired assistant Crown Attorney for the District of Kenora, Ontario. Starting in 1985, he conducted criminal prosecutions for more than twenty remote Ojibway and Cree First Nations communities in northwestern Ontario. He is the author of two previous bestsellers on indigenous themes, Dancing with a Ghost and Returning to the Teachings, both of which have been shortlisted for the Gordon Montour Award for the best Canadian non- fiction book on social issues. Following his retirement, Ross was awarded the prestigious 2011 National Prosecution Award for Humanitarianism, and the Ontario Crown Attorneys Association has created an award named after him. In 2014, Rupert Ross was honoured by Ontario Library Services for his latest book Indigenous Healing: Exploring Traditional Paths.