An Evening with Okey Ndibe, author of Never Look an American in the Eye, Foreign Gods, Inc., and Arrows of Rain 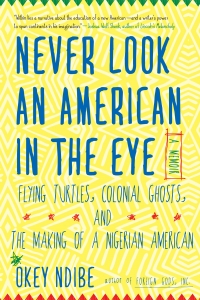 Okey Ndibe is the author of the novels Never look an American in the eye: A Memoir of flying turtles, colonial ghost, and the making of a NIgerian American, Foreign Gods, Inc. and Arrows of Rain, and co-editor (with Zimbabwean writer Chenjerai Hove) of Writers Writing on Conflicts and Wars in Africa.

Ndibe earned MFA and PhD degrees from the University of Massachusetts at Amherst and has taught at Brown University in Providence, RI, Trinity College in Hartford, CT (where the student newspaper named him one of 15 professors students should take classes with before graduating), Simon’s Rock College in Great Barrington, MA (where he won a new faculty teaching award), Connecticut College in New London, CT (where the student newspaper included him on a list of “five outstanding professors”), and the University of Lagos (as a Fulbright scholar).

He first came to the US to be the founding editor of African Commentary, a US-based international magazine published by the late great novelist Chinua Achebe. Among the magazine’s columnists were Achebe, Nadine Gordimer, Kofi Awoonor, Ben Okri, Michael Ekwueme Thelwell, John Edgar Wideman, Fela Anikulapo-Kuti, and Johnetta Cole.

Ndibe later served as an editorial writer for Hartford Courant, the oldest continuously published newspaper in the US, where one of his essays, “Eyes To The Ground: The Perils of the Black Student,” was chosen by the Association of Opinion Page Editors as the best opinion piece in an American newspaper in 2000, and another essay, “Unwarranted Graphic Authentication,” was named the 2001 best opinion piece by the CT chapter of the Society of Professional Journalists.

His opinion pieces have been published by numerous publications, including The New York Times, BBC online, Al Jazeera online, Financial Times, Fabian Society Journal, and the (Nigerian) Daily Sun, where his widely syndicated weekly column appears. He is currently working on a novel titled Return Flights as well as a non-fiction book, Going Dutch and other American Mis/Adventures, a series of essay vignettes based on his immigrant experiences.

Dr. Ndibe will be in Ottawa for the Institute of African Studies (IAS) 3rd annual international undergraduate research conference scheduled for Saturday October 14, 2017 at Carleton University. We have the honour to partner with IAS to host this special reading by Ndibe on the evening of October 13. Ndibe will read and discuss his latest book Never Look an American in the Eye.