An Evening with Max Blumenthal, Author of The 51 Day War: Ruin and Resistance in Gaza 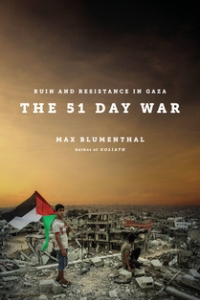 Hosted by Lia Tarachansky, a Jaffa-based filmmaker and the Israel/Palestine correspondent for The Real News Network (TRNN)

Beginning July 8, 2014, Israel launched air strikes and a ground invasion of Gaza that lasted fifty-one days, leaving over 2,000 people dead, the vast majority of whom were civilians. During the assault, at least 10,000 homes were destroyed and, according to the United Nations, nearly 300,000 Palestinians were displaced.

Max Blumenthal was on the ground during what he argues was an entirely avoidable catastrophe. In this explosive work of reportage, Blumenthal reveals the harrowing conditions and cynical deceptions that led to the ruinous war. Here, for the first time, Blumenthal unearths and presents shocking evidence of atrocities he gathered in the rubble of Gaza.

Max Blumenthal is an award-winning journalist and best-selling author whose articles and video documentaries have appeared in New York Times, Daily Beast, Guardian, Huffington Post, Salon, Al Jazeera English and many other publications. He is the author of Goliath: Life and Loathing in Greater Israel, and Republican Gomorrah: Inside The Movement That Shattered the Party.

Tickets at the door: $15 general admission or $10 students/low-income

“Max Blumenthal’s new book about this Israeli attack [is] so compelling, so necessary … It humanizes this event like nothing else I’ve read … The book is filled with very well-documented history, facts and statistics relevant to what the Israeli military calls Operation Protective Edge. And all of those are both interesting and important.” – GLENN GREENWALD, The Intercept

“Max Blumenthal has spent the last decade transforming himself into one of the most vital voices in journalism today, always speaking truth to power with fearlessness and integrity. As with his previous books, The 51 Day War is sure to be talked about for years to come.” – REZA ASLAN, author of Zealot and No god but God

“This will be the definitive history of the Israeli war of 2014 against Gaza. Blumenthal has once again demonstrated his devotion to truth and justice.” – W. PATRICK LANG, Former Defense Intelligence Agency head for Middle East / South Asia