An Evening with Karyn Freedman, Author of ONE HOUR IN PARIS - A TRUE STORY OF RAPE AND RECOVERY 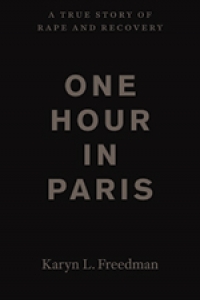 A Globe and Mail Top 100 Book of 2014
WINNER of the 2015 British Columbia National Award for Canadian Non-Fiction!

In this powerful memoir, philosopher Karyn L. Freedman travels back to a Paris night in 1990 when she was twenty-two and, in one violent hour, her life was changed forever by a brutal rape. One Hour in Paris takes the reader on a harrowing yet inspirational journey through suffering and recovery both personal and global. We follow Freedman from an apartment in Paris to a French courtroom, then from a trauma center in Toronto to a rape clinic in Africa. At a time when as many as one in three women in the world have been victims of sexual assault and when many women are still ashamed to come forward, Freedman’s book is a moving and essential look at how survivors cope and persevere.

At once deeply intimate and terrifyingly universal, One Hour in Paris weaves together Freedman’s personal experience with the latest philosophical, neuroscientific, and psychological insights on what it means to live in a body that has been traumatized. Using her background as a philosopher, she looks at the history of psychological trauma and draws on recent theories of posttraumatic stress disorder and neuroplasticity to show how recovery from horrific experiences is possible. Through frank discussions of sex and intimacy, she explores the consequences of sexual violence for love and relationships, and she illustrates the steep personal cost of sexual violence and the obstacles faced by individual survivors in its aftermath. Freedman’s book is an urgent call to face this fundamental social problem head-on, arguing that we cannot continue to ignore the fact that sexual violence against women is rooted in gender inequalities that exist worldwide—and must be addressed.

“One Hour in Paris is a slim book but a powerful one, and has the potential to catalyze the kind of dialogue that can lead to social change.” — BC National Award for Canadian Non-Fiction jury citation.

“One Hour in Paris is not only for survivors: it is a story of the audacity of courage in the face of trauma, a brave and moving book that deserves to be read by audiences at large.” — Quill and Quire starred review.

“The frank discussion in this book is valuable for those interested in social justice as well as to survivors, their loved ones, and mental health professionals.” — Library Journal starred review

More info about the book: http://www.freehand-books.com/books/one-hour-in-paris.

Karyn Freedman was born in Winnipeg, Manitoba, in 1968, the middle of three girls. She has a BA and MA in philosophy from the University of Manitoba and a PhD in philosophy from the University of Toronto. She is an associate professor in the Department of Philosophy at the University of Guelph, where she began her teaching career in 2002. Karyn lives in Toronto and in her spare time plays left wing in a women’s recreational hockey league. Although she has lived in Toronto for close to twenty years, her allegiance is to the Winnipeg Jets. One Hour in Paris is her first book.

She has a webstie: karynfreedman.com.