An Evening with Geza Tatrallyay and Andrew Caddell 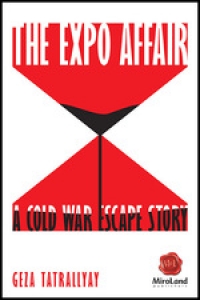 GEZA TATRALLYAY is the author of The Expo Affair released in Spring 2016.

Geza was born in Budapest, Hungary, and escaped with his family in 1956, immigrating to Canada. Geza worked as a host in the Ontario Pavilion at Expo ’70, was selected as a Rhodes Scholar, attending Oxford University, and represented Canada as an epée fencer in the 1976 Olympic Games in Montreal. He is the author of Twisted Reasons (Deux Voiliers), For the Children (Editions Dedicaces), andCello’s Tears (P.R.A. Publishing). Since 2004, he has been semi-retired, devoting his time to his family and his writing.

The Expo Affair is a narrative memoir of international intrigue and romance that took place in the exotic setting of Expo '70 in Osaka, Japan. As a host at the Ontario Pavilion, the author, Geza Tatrallyay, was approached by three Czechoslovak hostesses who wanted to defect to Canada. What follows are his efforts to make their wish come true. Notables such as former Prime Minister Trudeau, External Affairs Minister Mitchell Sharp and General George Kitching play a role, as do individuals who have since become prominent in Canada as businessmen, artists and ambassadors.

ANDREW CADDELL is a co-author of The Goal: Stories About Our National Passion with Dave Stubbs & Philip Caddell.

Andrew Caddell, Dave Stubbs and Philip Caddell have written for readers of all ages a wonderful collection of short stories about Canada’s passion for hockey. Ranging from the 1935 Stanley Cup to the present day, The Goal is a salute to the fans who pay to watch, the kids who play the game and the players who never made it.

“I have always maintained that you cannot understand a country until you understand the game it plays most passionately. This, then, is more than a book about hockey—it is about the very soul of Canada.” - Roy MacGregor, Author of Home Team (Governor General's Award Finalist)

“You can feel the cold and hear the cut of skates on a backyard rink—these stories about one family’s love of the game will resonate with anyone who’s worshipped a hockey hero or played the game at any level.” - Roger Smith, former CTV News Reporter

“There is a timeless charm to the stories of The Goal. They bridge the old-timer's longing for past glory with the rookie's discovery of Canada's greatest game." - The Ottawa Review of Books