An Evening with Fiction writers Michael Mirolla and Claude Lalumiere 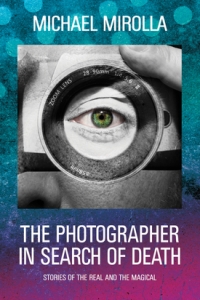 Michael Mirolla is the author of numerous novels, plays, and short story and poetry collections. Among his publications are three Bressani Prize winners: the novel, Berlin (2010); the poetry collection, The House on 14th Avenue (2014); the short story collection, Lessons in Relationship Dyads (2016). A Theory of Discontinuous Existence was selected among the stories chosen for The Journey Prize Anthology. The Sand Flea was a Pushcart Prize nominee. Born in Italy and raised in Montreal, Michael now makes his home in the Greater Toronto Area. On February 28, Michael Mirolla will be joining Ottawa author Claude Lalumiere to read his new collection of short stories, The Photographer in Search of Death: Stories of the Real and the Magical.

In The Photographer in Search of Death, Michael tells us stories that blend the explicable with the inexplicable. As if a camel were actually passing through the eye of a needle, these stories pass what is commonplace through a hyper-realistic lens into the utterly mysterious. Houses have rooms that appear and disappear. Very real objects, invaded by an unbelievable force, become believably unreal. Streets filled with everyday individuals become – in our modern technological environment – ultra ordinary. What we wish to avoid becomes unavoidable. This is a world beyond the merely "magical" – this is a binary world of becoming.