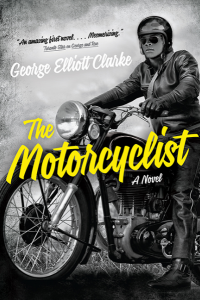 Award-Winning author George Elliott Clarke will be joined by a fellow published poet, playwright and essayist charles c. smith and Waubgeshig Rice, author of 2 books: Midnight Sweatlodge and Legacy for a conversation on George's latest novel the Motorcyclist and poetry!

Ticket: $10 in advance, $15 at the door available for purchase in store or online.

About the Book - The Motorcyclist

Carl Black is an intellectual and artist, a traveller, a reader and an unapologetic womanizer. A motorcyclist. He burns for the bohemian life, but is trapped in a railway porter’s prosaic—at times humiliating—existence. Taking place over one dramatic year in Halifax, Nova Scotia, The Motorcyclist vividly recounts Carl’s travels and romantic exploits as he tours the backroads of the east coast and the bedrooms of a series of beautiful women. Inspired by the life of George Elliott Clarke’s father, the novel tells the story of a black working-class man caught between the expectations of his times and gleaming possibilities of the open road.

In vibrant, energetic, sensual prose, George Elliott Clarke brilliantly illuminates the life of a young black man striving for pleasure, success and, most of all, respect.

"The novel is subtly subversive in the sense of how it capably fleshes out not just a black man, but a man who happens to be black, a vital cultural distinction that lends the novel an air of uncompromising universality. Using the social tensions of the ’50s and ’60s — with the civil rights touchstones being American entities Martin Luther King and Malcolm X — the story shines a light on how much class defines us, nearly as much as race does. Most of all, it posits that African-Canadian literature is Canadian literature. The Motorcyclist functions as a quintessential Canadian novel, to be consumed by Canadians of all stripes while it drives home hard truths on what it meant — and still often means — to zoom along life’s path as a person of colour in contemporary Canada." - National Post

"The Motorcyclist is a difficult novel, thematically and linguistically. Clarke writes with a dense, allusive poetic quality (as one might expect from a writer who, after completing a term as Toronto’s Poet Laureate was recently appointed Canadian Parliamentary Poet Laureate) even when depicting the everyday brutalities of Black’s life, and some readers might find themselves lost in the flow of Black’s consciousness and the referentiality of the prose. It is, however, worth the effort: with The Motorcyclist, Clarke has rendered not just an entire world, but also an entire man, flawed and unforgettable." - Toronto Star

On CBC's The Next Chapter: http://www.cbc.ca/news/george-elliott-clarke-on-the-motorcyclist-1.3442106.

George Elliott Clarke’s books include George & Rue, winner of the Dartmouth Book Award for Fiction and longlisted for the International IMPAC Dublin Literary Award; Execution Poems, winner of the Governor General’s Literary Award for Poetry; and Whylah Falls, winner of the Archibald Lampman Award for poetry and chosen for CBC’s inaugural Canada Reads competition. In 2008, he was appointed to the Order of Canada at the rank of Officer. He was recently the Poet Laureate of Toronto, from 2012 to 2015, and currently teaches at the University of Toronto. On January 1 2016, Mr. Clarke became Canada’s seventh Poet Laureate. For more about George Elliott Clarke: http://www.lop.parl.gc.ca/About/Parliament/Poet/current-poet-laureate-e.html.

charles c. smith is a published poet, playwright and essayist who has written and edited thirteen books.  He won second prize for his play Last Days for the Desperate from Black Theatre Canada, has edited three collections of poetry, has four published books of poetry – including Partial Lives- Williams Wallace Press, and travelogue of the bereaved, Mawanzi House (formerly TSAR Publications) - and his poetry has appeared in numerous journals and magazines, including Poetry Canada Review, the Quille and Quire, Descant, Dandelion, the Amethyst Review, Bywords, Canadian Ethnic Studies and others.  he has received grants from the Ontario Arts Council and the Toronto Arts Council for both his poetry and for his work with the ‘wind in the leaves collective’ where he is artistic director of a multidisciplinary performance group involving dance, image, recorded and live music based on his poetry. charles is also the Executive Director of Cultural Pluralism in the Arts Movement Ontario and the Artistic Director for wind in the leaves collective.

Waubgeshig Rice is an author and journalist originally from Wasauksing First Nation. He developed a strong passion for storytelling as a child while learning about being Anishinaabe. The stories his elders shared and his unique experiences growing up in his community inspired him to write creatively. Some of the stories he wrote as a teenager eventually became Midnight Sweatlodge, his first collection of fiction published by Theytus Books in 2011. His debut novel, Legacy, was also published by Theytus in the summer of 2014. His journalism career began when he was a 17-year-old exchange student in northern Germany, writing about being Anishinaabe in a European country for newspapers back in Canada. He graduated from Ryerson University’s journalism program in 2002, and has worked in a variety of media across Canada since. He started working for CBC in Winnipeg in 2006. Along with reporting the news, he has produced television and radio documentaries and features for the public broadcaster. He currently works as a video journalist for CBC News Ottawa. In 2014, he received the Anishinabek Nation’s Debwewin Citation for Excellence in First Nation Storytelling.