After the Sands Book Launch with GORDON LAXER and Bruce Campbell 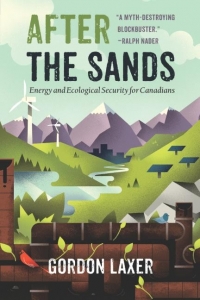 After the Sands outlines a vision and a road map to transitioning Canada to a low-carbon society.

Despite its oil abundance, with no strategic reserves, Canada is woefully unprepared for the next global oil supply crisis. There’s no good reason for Canadians to use much more oil per capita than people in other sparsely populated, northern countries like Norway, Finland and Sweden—nations that use 27 to 39 percent less oil per person. In After the Sands, political economist Gordon Laxer proposes a bold strategy of deep conservation and a Canada-first perspective to ensure that all Canadians have sufficient energy at affordable prices.

The most achievable way to gain energy security is to supply Canadians with their own oil, natural gas and renewable energy. And the best way to cut carbon emissions is by phasing out Canada’s role as a carbon-fuel exporter.

Canada has all the oil, gas and coal needed to transition to a low-carbon future. Remarkable hydro power resources give Canadians a large base of renewable energy, which can be expanded with wind, solar, geothermal and biomass. Few countries have these options in adequate quantities. But, as Laxer argues, Canada will not get there until we overcome the power of vested interests and untangle the trade agreements that block Canadians from secure and fair access to the nation’s own energy resources.

Impeccably researched, After the Sands is critical reading for anyone concerned with climate change and the future of Canada.

Sponsored by Canadian Centre for Policy Alternatives and rabble.ca

Bruce Campbell is the Executive Director of the Canadian Centre for Policy Alternatives (CCPA). Last year, Bruce Campbell published 3 reports documenting regulatory failures behind the Lac-Mégantic disaster. In 2012-13, he also produced a report comparing Norway with Canada and Alberta's Management of Petroleum Wealth "The Petro-Path Not Taken". He will discuss After the Sands with Gordon Laxer after Gordon's short presentation followed by Q&A.

Gordon Laxer, PhD, is the founding director and former head of Parkland Institute at the University of Alberta in Edmonton. A political economist and professor emeritus at the University of Alberta, Laxer is a prominent public intellectual. He has been widely published in both newspapers and academic journals, and has authored several books, including Open for Business: The Roots of Foreign Ownership in Canada (Oxford University Press). More about Gordon: http://www.gordonlaxer.com/.