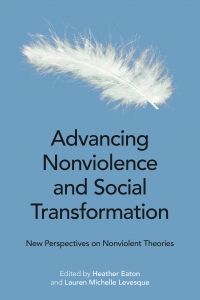 Nonviolence is emerging as a topic of great interest in activist, academic and community settings. In particular, nonviolence is being recognized as a necessary component of constructive and sustainable social change. This book considers nonviolence in relationship to specific social, political, ecological and spiritual issues. Through case studies and examinations of social resistance, gender, the arts, and education, it provides specialists and non-specialists with a solid introduction to the importance and relevance of nonviolence in various contexts.

Advancing Nonviolence and Social Transformation is organized into five sections. The first section is a set of essays on various historical and contemporary perspectives on nonviolence. The second section consists of essays on philosophical and theoretical explorations of the topic. The third and fourth sections expand the scope of nonviolence into the areas of thought and action, including Indigenous resistance, student protests, human trafficking, intimate partner violence and ecological issues. The final section takes nonviolence into the study of wonder, music, education and hope. The book will be useful to anyone working in the theories and practices of social change.

"Nonviolence is the most important—and most neglected—path forward for humanity, and this breathtaking new collection offers many new insights into the way of nonviolence for our troubled world. I hope many will read it, discuss it, and share it widely so that together we can ‘advance nonviolence’ for positive social transformation for justice, disarmament and peace. We can all become nonviolent. We can all work for a more nonviolent world. We can all join the global grassroots movement for a new future of nonviolence. This wise book is a gift that can help us with the task ahead.” -  John Dear, activist, author, and Nobel Peace Prize Nominee

Marie Boglari is a PhD candidate in Conflict Studies at Saint Paul University in Ottawa, where she teaches BA-level courses on social justice and alternative dispute resolution. Her thesis consists of a qualitative study on the impact of ethnic and nationalist discrimination on the actors of conflict.

Heather Eaton, PhD, is a full professor in Conflict Studies at Saint Paul University in Ottawa. Her recent work has focused on religious imagination; evolution; Earth dynamics; peace and conflict studies; gender, ecology, and religion; animal rights; and nonviolence. She has published numerous academic articles and several books, such as: The Intellectual Journey of Thomas Berry (2014) and Ecological Awareness: Exploring Religion, Ethics and Aesthetics with Sigurd Bergmann (2011).

Richard Feist, PhD, is an associate professor of philosophy in the Faculty of Human Sciences and Philosophy at Saint Paul University in Ottawa. He has published articles in the philosophy of science, metaphysics, ethics and war. Feist is currently working on a study of victory and just-war theory as well as several articles in metaphysics and ethics.

Eileen Kerwin Jones has a background in public health, midwifery, and ethics. She has worked nationally and internationally in the fields of health and education and is a founding member of PACT-Ottawa, a Canadian NGO challenging contemporary slavery and human trafficking. She teaches in the Humanities Department of John Abbott College, Montreal, CA, where she is the Coordinator of the Certificate in Women’s Studies and Gender Relations.

Lauren Michelle Levesque, PhD, is a lecturer at Saint Paul University, Ottawa, Canada, where she teaches courses on spirituality, feminist ethics, and trauma, healing, and reconciliation. Levesque was a 2013–2014 postdoctoral fellow with the Improvisation, Community, and Social Practice project housed at the University of Guelph, Guelph, Canada. Her research interests include nonviolence, arts-based research, and creative modalities of grassroots peacebuilding.

Noel Salmond, PhD, is an associate professor in the College of the Humanities at Carleton University in Ottawa. His research interests include religion and visual culture, modernist movements in Hinduism and Buddhism, religion and discourses on the environment, and theories of religion.

Martin Samson is a PhD candidate in Conflict Studies at Saint Paul University in Ottawa. His thesis focuses on a theoretical and literary analysis of emancipation and conflict through the philosophical and sociological thought of Michel Freitag (1935–2009). Samson teaches BA-level courses on social justice, climate change, and the world-ecological crisis at Saint Paul University, and conflict studies at Discovery University, an outreach university in partnership with Saint Paul, the University of Ottawa, and the Ottawa Mission.