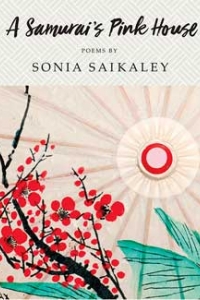 Join us for a night of poetry to celebrate Sonia Saikaley's new poetry book, A Samurai’s Pink House!

Sonia will be joined by Ryoko Itabashi who will play the shamisen (a traditional Japanese musical instrument), Guy Simser and Claudia Radmore, who will read their respective poems at this event.

The poems in A Samurai’s Pink House are threaded with the transformation of the seasons from Matsuo Basho’s travels to a love affair between a kabuki cross-dresser and a lonely geisha and the struggles of women in ancient and modern-day Japan. The collection takes the reader on a journey through the fascinating culture of Japan with graceful and accessible language. A sensuous, powerful and beautiful collection that moves across rice fields, tea houses, cherry orchards and narrow alleys where characters, in different stages of life, strive to find identity, peace and love.

“The acuity of perception, empathetic sensibility and long imaginative reach behind these poems will authentically transport readers across historical and cultural distances into both the Japan of past centuries and the Japan of today.” —Allan Briesmaster, author of Against the Flight of Spring and River Neither

“At times wistful and evocative, at other times a provocative exploration of femininity and female sexuality in Japan, this collection captured my imagination until the very end.” —Leslie Shimotakahara, author of The Reading List and After the Bloom

Sonia Saikaley’s new poetry collection A Samurai’s Pink House is published by Inanna Publications. Her first book, The Lebanese Dishwasher, co-won the 2012 Ken Klonsky Novella Contest and her first collection of poetry, Turkish Delight, Montreal Winter, was published in 2012. She is currently working on a novel called Jasmine Season on Hamra Street, which was awarded an Ontario Arts Council grant. A graduate of the Humber School for Writers, she lives in her hometown of Ottawa. In the past, she worked as an English teacher in Japan.

Claudia Coutu Radmore writes lyric poems as well as Japanese-form poetry. Her bilingual tanka collection Your Hands Discover Me/ Tes mains me découvrent, (2010, Éditions du tanka francophone, Montreal) has been followed by other chapbooks and collections. Accidentals, (Apt. 9 Press, Ottawa) won the 2011 bpNichol Chapbook Award. She runs catkin press which has been publishing Japanese-form poetry since 2013. In 2016-2017 she has published 8 authors in that genre, including Guy Simser’s memoir, She Don’t Mean a Thing If She Ain’t Got That Swing, and My Head Filled With Pakistan, for well-known Ottawa lyric poet Blaine Marchand. Caludia is co-editor with Marco Fraticelli of the 2017 Haiku Canada’s 40th members’ anthology, to be published by Ekstasis Press in B.C. This spring, Cough of a Sloth, a chapbook of modern haiku known as gendai, was published by Pearl Pirie’s Phaphours Press, and the business of isness by Mike Montreuil’s Éditions des petits nuages.

Ryoko Itabashi was born in Japan and has been involved in music since childhood. Early on, she played violin and piano, but found her true calling in traditional Japanese instruments. Ryoko began learning the Tsugaru Shamisen in 2001 under the late Rinshoji Kida, who was a well-known Shamisenist in Japan. She also learned folk music for the Shamisen from Reiko Inasawa. Since moving to Canada in 2009, Ryoko has been playing the Tsugaru Shamisen at various venues in Montreal, Quebec and has expanded her activities to the national Capital Region since the summer of 2012. Ryoko’s goal is to continue to fulfill her lifelong dream of sharing Japanese music and culture with the world.