A People’s Senate for Canada, Not A Pipe Dream! with Helen Forsey 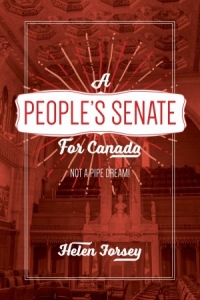 This little book is written for Canadians who care about our democracy and the future of our planet. The Senate, surprisingly, could make major contributions to both. A People’s Senate for Canada explains how we can make that happen.

What if we had a Senate that was independent of party politics, truly committed to “sober second thought” and dedicated to the common good? What if Senate appointments focused on experience, integrity and creativity, and flowed from a non-partisan participatory process based on merit and reflective of our country’s diversity? What if senators were able to fully devote themselves to their proper legislative and investigative work, cooperating wherever possible, free of party control and electoral worries, and financially accountable to the Auditor General? As Helen Forsey demonstrates, such a People’s Senate would not require risky and questionable constitutional amendments: the needed changes could be made within the present framework. In fact, some hopeful initiatives are already under way.

A People’s Senate for Canada combines grassroots experience, thorough research and critical commentary to create a people’s resource for positive change. This book offers a rationale, an analysis and a feasible proposal for an upper house that would restore citizen participation and help check government power. It is an antidote to cynicism and a prescription for a truly honourable Senate, one that would make us proud.

"This is a timely book about reclaiming our democracy from the control of global corporations and the Prime Minister's Office. Provocative and thoroughly researched, it links the Senate to current issues like climate change, trade agreements, human rights and electoral reform. A People's Senate is exactly what this country needs today – and it is not a pipe dream! " - Helen Forsey

Helen Forsey is an activist writer and the daughter of the late trade unionist, constitutional expert and Senator, Eugene Forsey. She has worked in international cooperation and popular education in Latin America, West Africa and Canada. Her previous publications include three books: Eugene Forsey: Canada’s Maverick Sage; The Caboose at the Cape: A Story of Coming Home; and Circles of Strength: Community Alternatives to Alienation, and numerous articles on constitutional, rural, feminist and political issues. A mother and grandmother, she divides her time between the Ottawa Valley and Newfoundland’s Avalon Peninsula.