A New Kind of Union with Fred Wilson and Maude Barlow 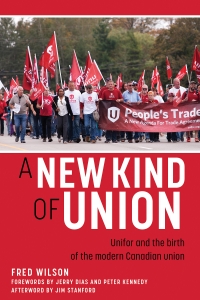 Join Fred Wilson and Maude Barlow for the Ottawa launch of A New Kind of Union: Unifor and the Birth of the Modern Canadian Union.

Fred Wilson played a key organizing and planning role in the New Union Project, which culminated in the creation of Unifor. In this new book, he offers a riveting insider's account of the unique process that created the union and motivated its actions.

This event is free and accessible at 251 Bank St. on the second floor.
Light refreshments will be available.
RSVP on Facebook

"[A] timely and urgent call for a wider social solidarity to counter the demagogic appeal of right wing populists seeking to exploit the frustrations of working people and to impose their intolerant and regressive agenda on us all." - Maude Barlow

Maude Barlow is the Honorary Chairperson of the Council of Canadians and chairs the board of Washington-based Food and Water Watch. She is also the author of dozens of reports, as well as 18 books, including her latest, Boiling Point: Government Neglect, Corporate Abuse, and Canada’s Water Crisis.