1,000 Days and Counting: The Detention of an Innocent Man 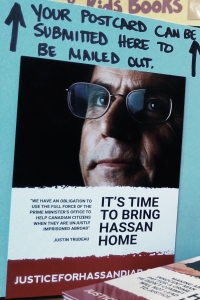 Dr. Hassan Diab is a Canadian sociology professor who taught at Carleton University and the University of Ottawa. He was extradited to France on November 14, 2014, accused of involvement in the 1980 rue Copernic synagogue bombing in Paris. Since May 2016, the French judges investigating the case found “consistent evidence” supporting Hassan’s innocence and concluded that he could not have been in France at the time of the bombing. Yet, he remains in prison and faces the prospect of a wrongful conviction under France’s anti-terrorism laws.

The Hassan Diab Support Committee and Octopus Books invite you to a screening of “Rubber Stamped: The Hassan Diab Story”, followed by a panel discussion with Carleton professors Maeve McMahon and Peter Gose, together with Roger Clark, former secretary general of Amnesty International Canada. They will be speaking about Hassan Diab's wrongful conviction and Canada's extradition law.

This is an all ages event.