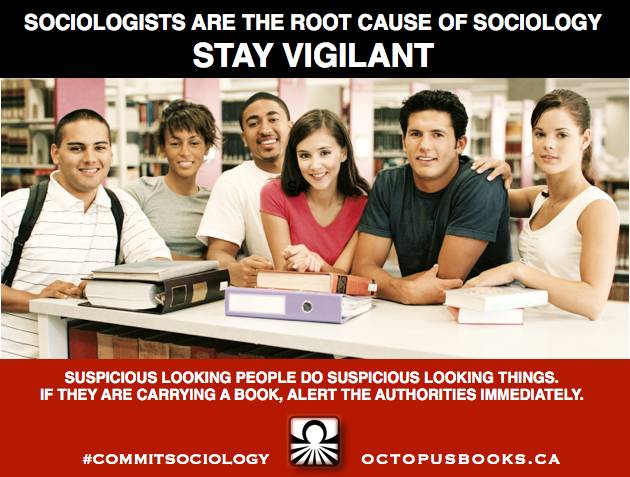 Last week, Prime Minister Stephen Harper said it wasn’t the time to “commit sociology” when questioned about a thwarted bombing on a Via Rail train.

His comment has caused a bit of a stir. And while his use of this odd term might be mere overreach on the part of his communications handlers, it clearly belittles and demeans anyone’s attempt to actually come to grips with an issue rather than rely on pre-programmed responses based on racism and fear.

When Stephen Harper tells us not to understand something, we say it’s time to stand up, muster our courage and boldly write blog posts.

Yeah, it’s time we tell him a thing or two. We know he doesn’t like to read – apart from the Bible – so we’re not going to suggest he “enlighten” himself by considering other points of view. He’s just not built that way.

That’s okay. In fact, that makes it easier for the rest of us, in terms of understanding what we’re up against. We’re not trying to change his mind. We’re trying to arm our own.

While we are but a humble bookshop, we want to add our voices to the #commitsociology uproar – and urge our fellow Canadians to commit all sorts of things – reading, mischief and rebellions – all across the land.

Sorry Steve, but committing sociology is one of the best things Canadians can do when trying to understand the world around us. But we won't stop there.

Like all of the entries below, we offer just a taste of the fine books available from our mighty shop. A nibble, to whet your appetite and arm your imagination against the Harper regime….

Bonita Lawrence’s Fractured Homeland reveals the real history of the people and the land of the Ottawa River watershed – including Parliament Hill, the place where Canadians pretend to make decisions.

Peter Kulchyski’s the red indians give you an overview of the how colonialism works, and how it continues today.

When you need someone to subvert history, Thomas King is always a good bet – and a wonderful storyteller. Check out anything by him. His latest is The Inconvenient Indian.

Political resistance must go hand in hand with aboriginal-settler reconciliation, according to Leanne Simpson. Her book, Dancing On Our Turtle’s Back, explains how indigenous intellectual traditions are central to that political resurgence.

Published prior to the Harper machine securing an electoral “majority” government, Christian Nadeau’s Rogue in Power lays out Steve’s real agenda and the damage he was able to inflict with a parliamentary minority as the opposition parties squawked.

If the “situation in the Middle East” confuses you, Engler’s Canada and Israel: Building Apartheid will help. It drills deeply into the “special relationship” that has developed between religious right wing governments of Canada and Israel.

Buy them both from Octopus.

Canada’s mainstream media outlets are in utter denial – or complicity – about the right wing evangelical Christianity that underlies our dear leader’s thinking. No “policy” area is untouched from the authoritarian, science-denying and difference-hating doctrines emanating from the rightwing religious organizations whose members fill the ranks of the Harper machine.

Everything from the role of Israel in the Middle East to the “dominion” of industrialism over ecology to the role of the welfare state itself, Harper’s “faith” informs more of his government’s actions than you know.

Marci McDonald’s Armageddon Factor documents the rise of Canada’s political religious right, from Christian colleges to the staffers on Parliament Hill. Forget the Walking Dead. You want scary? Read this one.

Saving the CBC by Wade Rowland documents how our country’s public broadcaster has endured the antagonism of federal governments and relentless budget cuts – and now, the existential threat it faces by the twin forces of commercialization and the vitriol of right wing zealots.

There is much to say about the Harper infection’s impact on the natural world. But we’ll close with just one book that sums it up.

Andrew Nikiforuk’s Tar Sands demolishes the wishful thinking that the tar sands can be “developed sustainably”. Read this book and you’ll know the world’s largest industrial development is a super-slick, one-way highway to hell, built by the Liberals and ramped up by the Conservatives.