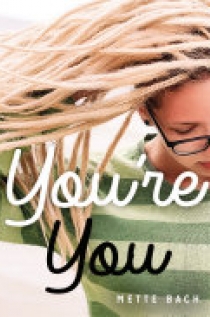 In this book author Mette Bach offers a believable portrayal of an LGBTQ teen who has always identified as a lesbian. When she finds herself attracted to a South Asian boy, she comes to a new identity for herself as bisexual. 17-year-old Freyja is outspokenly lesbian and politically active about LGBTQ issues at her school's Gay-Straight Alliance. When her girlfriend Rachel breaks up with her, she suspends her work on the online video blog they created together to celebrate their pride. Instead she starts volunteering at the local food bank. But she can't figure out why the team leader at the food bank, a guy named Sanjay, doesn't seem to approve of her. Freyja learns about food justice, and becomes attracted to Sanjay's passion for the cause. As her friendship with Sanjay grows, she realizes that they connect in a way she never did with Rachel. But can Freyja be in love with Sanjay if she identifies as a lesbian? When members of her school's GSA assume that Freyja has "gone straight" and oppose her leadership of the group, Freyja has to choose between sticking with her old idea of herself — and taking a chance on love.