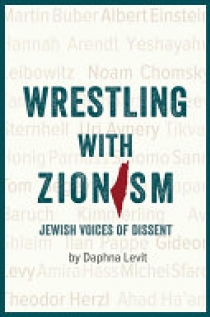 A CHRONOLOGY OF VOICES, FROM THE BIRTH OF ZIONISM UNTIL TODAY THEODOR HERZL, AHAD HA'AM, MARTIN BUBER, ALBERT EINSTEIN, HANNAH ARENDT, YESHAYAHU LEIBOWITZ, NOAM CHOMSKY, TANYA REINHART, ZEEV STERNHELL, URI AVNERY, TIKVA-HONIG PARNASS, SHLOMO SAND, TOM SEGEV, SIMHA FLAPAN, BARUCH KIMMERLING, BENNY MORRIS, AVI SHLAIM, ILAN PAPPE, GIDEON LEVY, AMIRA HASS, AND MICHEL SFARD Portrayals of Israel in mainstream Western media as the "homeland of the Jews" and "the only democracy in the Middle East" are commonplace. Since the realities behind them are rarely shown, these truisms have become habitual assumptions underlying news coverage, public policy, and ordinary conversation. At the same time, while criticism of a government's policies is considered an essential right and safeguard of democracy, criticism of Israeli policy is persistently attacked as anti-Zionist--or even anti-Semitic--by a majority of Israelis and by those outside the country who claim to be Israel's friends. The views of independent Israelis and Jews who examine, challenge, or oppose extreme Israeli governments and policies are rarely heard. This book attempts to recover a history of dissent. In Wrestling with Zionism: Jewish Voices of Dissent, Daphna Levit amplifies the voices of twenty-one Jewish and Israeli thinkers--scholars, theologians, journalists, lawyers, activists--who have grappled with the evolution of Zionism since its inception on political, religious, cultural, ethical, or philosophical grounds. Beginning in the late-nineteenth century, well before the founding of the State of Israel, and surveying pioneering figures up until the present, she introduces, examines, and brings together a range of contrasting viewpoints into a single historical conversation. As well, with these portraits she honors a tradition of courageous intellectual inquiry and activism, rooted in Jewish ethical imperatives. Drawing on her own lifetime of activism and research, Levit has assembled a foundational text, enabling us to consider the relationship of modern political Zionism and Judaism today, in revealing historical light.