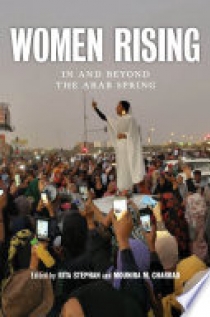 Groundbreaking essays by female activists and scholars documenting women’s resistance before, during, and after the Arab Spring Images of women protesting in the Arab Spring, from Tahrir Square to the streets of Tunisia and Syria, have become emblematic of the political upheaval sweeping the Middle East and North Africa. In Women Rising, Rita Stephan and Mounira M. Charrad bring together a provocative group of scholars, activists, artists, and more, highlighting the first-hand experiences of these remarkable women. In this relevant and timely volume, Stephan and Charrad paint a picture of women’s political resistance in sixteen countries before, during, and since the Arab Spring protests first began in 2011. Contributors provide insight into a diverse range of perspectives across the entire movement, focusing on often-marginalized voices, including rural women, housewives, students, and artists. Women Rising offers an on-the-ground understanding of an important twenty-first century movement, telling the story of Arab women’s activism.