White Mother to a Dark Race 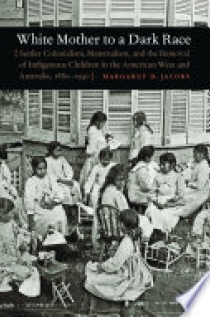 In the late nineteenth and early twentieth centuries, indigenous communities in the United States and Australia suffered a common experience at the hands of state authorities: the removal of their children to institutions in the name of assimilating American Indians and protecting Aboriginal people. Although officially characterized as benevolent, these government policies often inflicted great trauma on indigenous families and ultimately served the settler nations? larger goals of consolidating control over indigenous peoples and their lands. White Mother to a Dark Racetakes the study of indigenous education and acculturation in new directions in its examination of the key roles white women played in these policies of indigenous child-removal. Government officials, missionaries, and reformers justified the removal of indigenous children in particularly gendered ways by focusing on the supposed deficiencies of indigenous mothers, the alleged barbarity of indigenous men, and the lack of a patriarchal nuclear family. Often they deemed white women the most appropriate agents to carry out these child-removal policies. Inspired by the maternalist movement of the era, many white women were eager to serve as surrogate mothers to indigenous children and maneuvered to influence public policy affecting indigenous people. Although some white women developed caring relationships with indigenous children and others became critical of government policies, many became hopelessly ensnared in this insidious colonial policy.