What Makes a Social Crisis? 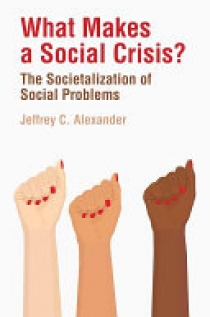 In this book, Jeffrey Alexander develops a new sociological theory of social crisis, which he calls societalization. He argues that crises are triggered not by objective social strains but by the discourse and institutions of the civil sphere. In the steady state, reactions to strains unfold within institutional boundaries, handled by organizational elites according to sphere-specific logics. Institutional boundaries can be breached only if there is code switching. When strains become subject to the utopian aspirations of the civil sphere, there emerges widespread anguish about social justice and the future of democratic life. Once admired institutional elites come to be represented as perpetrators, and the civil sphere becomes intrusive legally and organizationally, demanding repairs in the name of civil purification. Resisting such repair, institutional elites foment backlash, and a war of the spheres ensues. Alexander shows how this theory enables us to understand in a new way some of the major social crises of recent years, including the 2008 financial crisis, the Church pedophilia crisis that emerged in 2002, the phone-hacking crisis that exploded in the UK in 2011, and the #MeToo movement against sexual harassment in the workplace, which began with the Harvey Weinstein expose in 2017, and is still on-going today. A major new work by one of the leading social theorists in the world today, this book will be of great interest to students and scholars in sociology, politics and the social sciences generally.