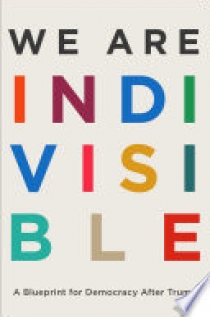 “The breakout star of the new activists.” —The Economist “If Democrats are able to retake the House in 2018, it will be a victory built from Greenberg and Levin’s blueprint.” —Politico “One of the biggest successes so far this year...Indivisible has played a leading role in turning out voters at congressional town halls to voice their opposition.” —The New York Times “The centerpiece of a robust new grassroots machinery.” —Rolling Stone This is a story of democracy under threat. It’s the story of a movement rising up to respond. And it’s a story of what comes next. Shortly after Trump’s election, two outraged former congressional staffers wrote and posted a tactical guide to resisting the Trump agenda. This Google Doc entitled “Indivisible” was meant to be read by friends and family. No one could have predicted what happened next. It went viral, sparking the creation of thousands of local Indivisible groups in red, blue, and purple states, mobilizing millions of people and evolving into a defining movement of the Trump Era. From crowding town halls to killing TrumpCare to rallying around candidates to build the Blue Wave, Indivisibles powered the fight against Trump—and pushed the limits of what was politically possible. In We Are Indivisible: A Blueprint for Democracy After Trump, the (still-married!) co-executive directors of Indivisible tell the story of the movement. They offer a behind-the-scenes look at how change comes to Washington, whether Washington wants it or not. And they explain how we’ll win the coming fight for the future of American democracy. We Are Indivisible isn’t a book of platitudes about hope; it’s a steely-eyed guide to people power—how to find it, how to build it, and how to use it to usher in the post-Trump era. *All proceeds to the author go to Indivisible's Save Democracy Fund

By Ali Abunimah
Macmillan | August 21, 2007 | 240 pages
In a provocative new approach to resolving the Israeli-Palestinian conflict, the Jordanian-American son of Palestinian refugees proposes that there should be one state, shared by two peoples, discussing the political, economic, geographical, and social benefits of such a move. Reprint. 15,000 first...  END_OF_DOCUMENT_TOKEN_TO_BE_REPLACED
International Politics & Socialism

By E. B. White
Harper | May 7, 2019 | 240 pages
“I am a member of a party of one, and I live in an age of fear.” These words were written by E. B. White in 1947. Decades before our current political turmoil, White crafted eloquent yet practical political statements that continue to resonate.   END_OF_DOCUMENT_TOKEN_TO_BE_REPLACED
International Politics & Socialism

By Nomi Claire Lazar
May 28, 2019 | 288 pages
How constructions of time shape political beliefs about what is possible--and what is inevitable To secure power in a crisis, leaders must sell deep change as a means to future good. But how could we know the future? Nomi Claire Lazar draws on stories across a range of cultures and contexts,...  END_OF_DOCUMENT_TOKEN_TO_BE_REPLACED
International Politics & Socialism

My Soul is Rested

By Howell Raines
Penguin Group USA | March 29, 1983 | 488 pages
Interviews with men and women, both Black and white, who participated in various ways in the Civil Rights movement of the 1960s provide a firsthand history of the movement, its leaders, supporters, and opponents, and its accomplishments   END_OF_DOCUMENT_TOKEN_TO_BE_REPLACED
International Politics & Socialism

Face to Face with Russia

By Vilis Vitols
Mosaic Press | March 15, 2019 | 208 pages
While there are many books published in English about Russia, the vast majority of them are written from the perspective of Western academics and journalists. Very few studies are conducted by people who live at the frontiers of this newly constituted Russian empire, under the leadership of...  END_OF_DOCUMENT_TOKEN_TO_BE_REPLACED
International Politics & Socialism