We are Born with the Songs Inside Us 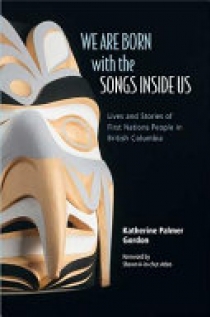 First Nations are the fastest growing population in the country. There are thousands upon thousands of young First Nations people growing up today who, together with the kind of individuals whose stories are told in this book, represent a future for this country that is brighter than it has been for a long, long time. --from the foreword by Shawn A-in-chut Atleo, National Chief of the Assembly of First Nations Since 2004, journalist Katherine Palmer Gordon has interviewed dozens of young First Nations people living in British Columbia--artists and community leaders, comedians and consultants, musicians and lawyers, people who are household names and those known only within their own communities. We Are Born with the Songs Inside Us collects sixteen candid stories gleaned from those interviews, stories of people who share an unshakeable belief in the importance of their cultural heritage to their well-being, to their success at what they do, and to their everyday lives. Included are Kim Baird, former chief of the Tsawwassen First Nation; Lisa Webster-Gibson, spoken word artist and rock-and-roll drummer with Delaware-Mohawk and Scottish-Canadian heritage who lives and works on Gabriola Island as an Environmental Assessment Professional; and John Marston (Qap'u'luq), an artist and storyteller from the Chemainus First Nation who learned to carve from his father. "What I put into each piece," he says, in his interview with Gordon, "is 100 percent me." Shattering stereotypes, We Are Born with the Songs Inside Us gathers the thoughts and hopes of young native people living in twenty-first century Canada. Each has a compelling, meaningful story that deserves to be told, understood and, above all, celebrated.