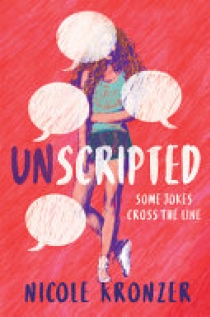 A funny and timely debut YA about the toxic masculinity at a famous improv comedy camp Seventeen-year-old Zelda Bailey-Cho has her future all planned out: improv camp, then Second City, and finally Saturday Night Live. She's thrilled when she lands a spot on the coveted varsity team at a prestigious improv camp, which means she'll get to perform for professional scouts--including her hero, Nina Knightley. But even though she's hardworking and talented, Zelda's also the only girl on Varsity, so she's the target for humiliation from her teammates. And her 20-year-old coach, Ben, is cruel to her at practice and way too nice to her when they're alone. Zelda wants to fight back, but is sacrificing her best shot at her dream too heavy a price to pay? Equal parts funny and righteous, Unscripted is a moving debut novel that Printz Award winner Nina LaCour calls "a truly special book, written at exactly the right time."