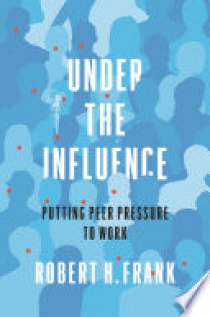 "From New York Times bestselling author and economics columnist Robert Frank, a revelatory look at the power and potential of social context. As psychologists have long understood, social environments profoundly shape our behavior, sometimes for the better, but often for the worse. Less widely noted is that social influence is a two-way street: Our environments are in large part themselves a product of the choices we make. Society embraces regulations that limit physical harm to others, as when smoking restrictions are defended as protecting bystanders from secondhand smoke. But we have been slower to endorse parallel steps that discourage harmful social environments, as when regulators fail to note that the far greater harm caused when someone becomes a smoker is to make others more likely to smoke. In Under the Influence, Robert Frank attributes this regulatory asymmetry to the laudable belief that individuals should accept responsibility for their own behavior. Yet that belief, he argues, is fully compatible with public policies that encourage supportive social environments. Most parents hope, for example, that their children won't grow up to become smokers, bullies, tax cheats, sexual predators, or problem drinkers. But each of these hopes is less likely to be realized whenever such behaviors become more common. Such injuries are hard to measure, Frank acknowledges, but that's no reason for policymakers to ignore them. The good news is that a variety of simple policy measures could foster more supportive social environments without ushering in the dreaded nanny state or demanding painful sacrifices from anyone"--