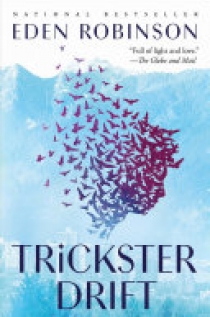 Following the Scotiabank Giller Prize-shortlisted Son of a Trickster comes Trickster Drift, the second book in Eden Robinson's captivating Trickster trilogy. In an effort to keep all forms of magic at bay, Jared, 17, has quit drugs and drinking. But his troubles are not over: now he's being stalked by David, his mom's ex--a preppy, khaki-wearing psycho with a proclivity for rib-breaking. And his mother, Maggie, a living, breathing badass as well as a witch, can't protect him like she used to because he's moved away from Kitimat to Vancouver for school. Even though he's got a year of sobriety under his belt (no thanks to his enabling, ever-partying mom), Jared also struggles with the temptation of drinking. And he's got to get his grades up, find a job that doesn't involve weed cookies, and somehow live peacefully with his Aunt Mave, who has been estranged from the family ever since she tried to "rescue" him as a baby from his mother. An indigenous activist and writer, Mave smothers him with pet names and hugs, but she is blind to the real dangers that lurk around them--the spirits and supernatural activity that fill her apartment. As the son of a Trickster, Jared is a magnet for magic, whether he hates it or not--he sees ghosts, he sees the monster moving underneath his Aunt Georgina's skin, he sees the creature that comes out of his bedroom wall and creepily wants to suck his toes. He also still hears the Trickster in his head, and other voices too. When the David situation becomes a crisis, Jared can't ignore his true nature any longer.