Towards a New Manifesto 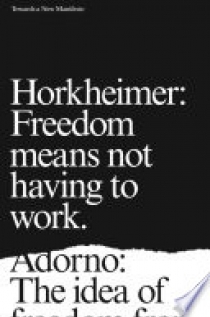 Theodor Adorno and Max Horkheimer wrote the central text of "critical theory", Dialectic of Enlightenment, a measured critique of the Enlightenment reason that, they argued, had resulted in fascism and totalitarianism. Towards a New Manifesto shows the two philosophers in a uniquely spirited and free-flowing exchange of ideas. This book is a record of their discussions over three weeks in the spring of 1956, recorded with a view to the production of a contemporary version of The Communist Manifesto. A philosophical jam-session in which the two thinkers improvise freely, often wildly, on central themes of their work--theory and practice, labor and leisure, domination and freedom--in a political register found nowhere else in their writing. Amid a careening flux of arguments, aphorisms and asides, in which the trenchant alternates with the reckless, the playful with the ingenuous, positions are swapped and contradictions unheeded, without any compulsion for consistency. A thrilling example of philosophy in action and a compelling map of a possible passage to a new world.