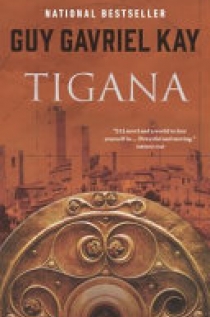 Guy Gavriel Kay's masterful novel about the road to rebellion is an epic filled with intensely realized characters and powerful emotions. An enduring classic of Canadian literature, Tigana is a powerful exploration of memory and lost identity, tyranny and freedom. Two rival conquerors have divided the Peninsula of the Palm. As the provinces in the peninsula were falling one by one, the sorcerer Brandin made a fateful decision, sending his beloved son to capture the last one. But when that son is killed on the battlefield, Brandin, blinded by grief, avenges his death by ruthlessly vanquishing the resistance and then cursing the people of this province with a dark sorcery--so that the very name of their home cannot be spoken or remembered. Years after that devastation, a handful of men and women set in motion a dangerous plot. Their aim: to overthrow both conquerors, and bring back to the world the lost brightness of an obliterated name--Tigana.