This Bridge Called My Back, Fourth Edition 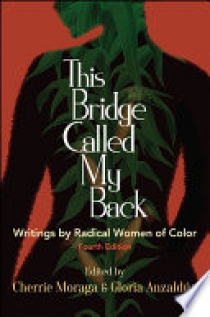 Updated and expanded edition of the foundational text of women of color feminism. Originally released in 1981, This Bridge Called My Back is a testimony to women of color feminism as it emerged in the last quarter of the twentieth century. Through personal essays, criticism, interviews, testimonials, poetry, and visual art, the collection explores, as coeditor Cherríe Moraga writes, “the complex confluence of identities—race, class, gender, and sexuality—systemic to women of color oppression and liberation.” Reissued here, nearly thirty-five years after its inception, the fourth edition contains an extensive new introduction by Moraga, along with a previously unpublished statement by Gloria Anzaldúa. The new edition also includes visual artists whose work was produced during the same period as Bridge, including Betye Saar, Ana Mendieta, and Yolanda López, as well as current contributor biographies. Bridge continues to reflect an evolving definition of feminism, one that can effectively adapt to, and help inform an understanding of the changing economic and social conditions of women of color in the United States and throughout the world. “Immense is my admiration for the ongoing dialogue and discourse on feminism, Indigenous feminism, the defining discussions in women of color movements and the broader movement. I have loved this book for thirty years, and am so pleased we have returned with our stories, words, and attributes to the growing and resilient movement.” — Winona LaDuke (Anishinaabe), Executive Director, Honor the Earth Praise for the Third Edition “This Bridge Called My Back … dispels all doubt about the power of a single text to radically transform the terrain of our theory and practice. Twenty years after its publication, we can now see how it helped to untether the production of knowledge from its disciplinary anchors—and not only in the field of women’s studies. This Bridge has allowed us to define the promise of research on race, gender, class and sexuality as profoundly linked to collaboration and coalition-building. And perhaps most important, it has offered us strategies for transformative political practice that are as valid today as they were two decades ago.” — Angela Davis, University of California, Santa Cruz “This Bridge Called My Back … has served as a significant rallying call for women of color for a generation, and this new edition keeps that call alive at a time when divisions prove ever more stubborn and dangerous. A much-cited text, its influence has been visible and broad both in academia and among activists. We owe much of the sound of our present voices to the brave scholars and feminists whose ideas and ideals crowd its pages.” — Shirley Geok-lin Lim, University of California, Santa Barbara “This book is a manifesto—the 1981 declaration of a new politics ‘US Third World Feminism.’ No great de-colonial writer, from Fanon, Shaarawi, Blackhawk, or Sartre, to Mountain Wolf Woman, de Beauvoir, Saussure, or Newton could have alone proclaimed this ‘politic born of necessity.’ This politic denies no truths: its luminosities drive into and through our bodies. Writers and readers alike become shape-shifters, are invited to enter the shaman/witness state, to invoke power differently. ‘US Third World Feminism’ requires a re-peopling: the creation of planetary citizen-warriors. This book is a guide that directs citizenry shadowed in hate, terror, suffering, disconnection, and pain toward the light of social justice, gender and erotic liberation, peace, and revolutionary love. This Bridge … transits our dreams, and brings them to the real.” — Chela Sandoval, University of California, Santa Barbara