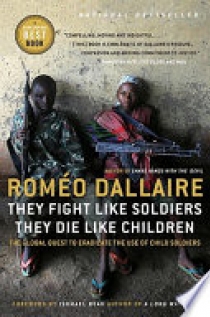 "The ultimate focus of the rest of my life is to eradicate the use of child soldiers and to eliminate even the thought of the use of children as instruments of war." --Roméo Dallaire In conflicts around the world, there is an increasingly popular weapon system that requires negligible technology, is simple to sustain, has unlimited versatility and incredible capacity for both loyalty and barbarism. In fact, there is no more complete end-to-end weapon system in the inventory of war-machines. What are these cheap, renewable, plentiful, sophisticated and expendable weapons? Children. Roméo Dallaire was first confronted with child soldiers in unnamed villages on the tops of the thousand hills of Rwanda during the genocide of 1994. The dilemma of the adult soldier who faced them is beautifully expressed in his book's title: when children are shooting at you, they are soldiers, but as soon as they are wounded or killed they are children once again. Believing that not one of us should tolerate a child being used in this fashion, Dallaire has made it his mission to end the use of child soldiers. In this book, he provides an intellectually daring and enlightening introduction to the child soldier phenomenon, as well as inspiring and concrete solutions to eradicate it.