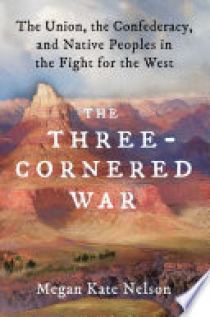 A dramatic, riveting, and deeply researched narrative account of the epic struggle for the West during the Civil War, revealing a little-known, vastly important episode in American history. In The Three-Cornered War Megan Kate Nelson reveals the fascinating history of the Civil War in the American West. Exploring the connections among the Civil War, the Indian wars, and western expansion, Nelson reframes the era as one of national conflict—involving not just the North and South, but also the West.