The Rise of Real-Life Superheroes 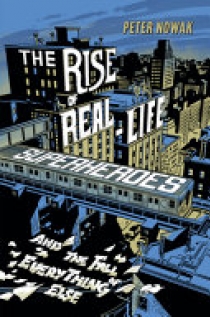 Life imitates art. As superheroes dominate pop culture, it shouldn't be too shocking then that superheroes are becoming real. As in really real. Scores of men and women around the world are putting on masks and costumes and hitting the streets. It's probably happening in a city near you. Phoenix Jones charges into a Seattle bar brawl with his pepper spray blasting, his padded body armour deflecting incoming punches and knife blades. Dark Guardian uses a judo flip to take down an angry drug dealer in Manhattan's grimy Jackson Square. Meanwhile, Polar Man takes a more Canadian approach, showing up in the remote northern town of Iqaluit dressed in a black-and-white costume to shovel snow from driveways. They're real-life superheroes: individuals who take on masked personae to fight crime and help the helpless. They don't have super powers, but they do try to make the world a better place. They aren't just basement-dwelling nerds either--they come from all walks of life, and their numbers are growing around the world thanks to a confluence of factors: the rise of comic book culture in mainstream media, a growing disillusionment with authority, the enabling effects of the internet and an appetite for fame and notoriety without repercussion. Many admit their activities are a form of self-therapy, a way to feel powerful in a world where it's easy to feel powerless. Many also want to inspire others to do the same; to shake society from its collective apathy. To some, real-life superheroes may seem like quirky outliers or dangerous vigilantes but, as Peter Nowak shows, they are also archetypes whose job is to remind us of the better part of human nature. Life-long comic book fan and veteran journalist Nowak goes to the source, meeting with real-life super heroes in North America and around the world to get their stories, tracing the rise of the phenomenon, investigating its meaning and what it means for the future of society.