The Right to Be Cold 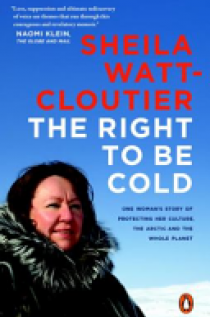 Now in paperback, one of Canada's most passionate environmental and human rights activists addresses the global threat of climate change from the intimate perspective of her own Arctic childhood The Arctic ice is receding each year, but just as irreplaceable is the culture, the wisdom that has allowed the Inuit to thrive in the Far North for so long. And it's not just the Arctic. The whole world is changing in dangerous, unpredictable ways. Sheila Watt-Cloutier has devoted her life to protecting what is threatened and nurturing what has been wounded. In this culmination of Watt-Cloutier's regional, national, and international work over the last twenty-five years, The Right to Be Cold explores the parallels between safeguarding the Arctic and the survival of Inuit culture, of which her own background is such an extraordinary example. This is a human story of resilience, commitment, and survival told from the unique vantage point of an Inuk woman who, in spite of many obstacles, rose from humble beginnings in the Arctic to become one of the most influential and decorated environmental, cultural, and human rights advocates in the world.