The Opposite of Hate 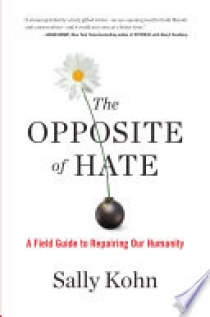 “A stunning debut by a truly gifted writer—an eye-opening read for both liberals and conservatives—and it could not come at a better time.”—Adam Grant, New York Times bestselling author of Option B, with Sheryl Sandberg What is the opposite of hate? As a progressive commentator on Fox News and now CNN, Sally Kohn has made a career out of bridging intractable political differences and learning how to talk respectfully with people whose views she disagrees with passionately. Her viral TED Talk on the need to practice emotional—rather than political—correctness sparked a new way of considering how often we amplify our differences and diminish our connections. But these days even famously “nice” Kohn finds herself wanting to breathe fire at her enemies. It was time, she decided, to look into the epidemic of hate all around us and learn how we can stop it. In The Opposite of Hate, Kohn talks to leading scientists and researchers and investigates the evolutionary and cultural roots of hate and how incivility can be a gateway to much worse. She travels to Rwanda, the Middle East, and across the United States, introducing us to former terrorists and white supremacists, and even some of her own Twitter trolls, drawing surprising lessons from dramatic and inspiring stories of those who left hate behind. As Kohn confronts her own shameful moments, whether it was back when she bullied a classmate or today when she harbors deep partisan resentment, she discovers, “The opposite of hate is the beautiful and powerful reality of how we are all fundamentally linked and equal as human beings. The opposite of hate is connection.” Sally Kohn’s engaging, fascinating, and often funny book will open your eyes and your heart.