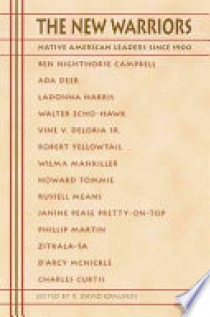 An indispensable introduction to the rich variety of Native leadership in the modern era, The New Warriors profiles Native men and women who have played a significant role in the affairs of their communities and of the nation over the course of the twentieth century. ø The leaders showcased include the early-twentieth-century writer and activist Zitkala-?a; American Indian Movement leader Russell Means; political activists Ada Deer and LaDonna Harris; scholar and writer D?Arcy McNickle; orator and Crow Reservation superintendent Robert Yellowtail; U.S.